In this post, we will analyze the questions of History and Culture from the UPSC Prelims 2020 examination. Last year on our youtube channel we prescribed you some set of books for History and Culture like every other subject and today we will check whether these books were successful in helping you in prelims this year.

For Modern India, generally one reads spectrum brief history of modern India and NCERTs (old or new) and for the culture section, we read NCERTs and Nitin Singhania. So here we will check how many questions can be solved from these routine books and what were the other sources from which question came from, and finally, we will discuss do we have to change our booklist, or if your first attempt is in 2021, then which books you can read, specifically for History section.

Out of 100 questions around 18 questions came from the History and Culture section. Modern History was comparatively difficult from past years, and less weightage is given to Modern India, In the culture section, there was more focus on Buddhism like every other year, but we do not know from which sources UPSC is deriving questions, are these questions falling from the sky, or newspaper or any other book that we are not reading.

We are reading some sources which are prescribed by some toppers or mentors, so here we will check whether these sources were enough to score good marks in prelims this year.

In this post, we will take a look at each question one by one, and we will find out the credibility of routine books that we are reading-

After doing History and Culture we will follow the same exercise for polity and other subjects. We are using set B for this purpose. You can download it from here-

If we can solve 12 out of 18 questions from routine sources like NCERTs and popular standard books then we can say that these books did their job well. Prelim is qualifying, even if we score half the marks we are good to go. So our target should not be to solve all the questions but most of the questions.

So first let us discuss the Indian culture part and after that Modern India. We are referring to set B. 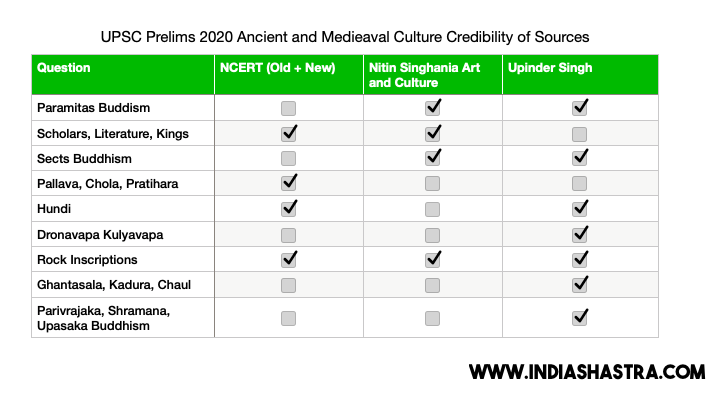 Q11 With the reference to the cultural history of India, which one of the following is the correct description of the term Paramitas?

a) The earliest Dharmashastra texts written in aphoristic (sutra) style

b) Philosophical schools that did not accept the authority of Vedas

c) Perfection whose attainment led to the Bodhisattva path

Now let us move to the next question

Q16 With reference to the scholars/ literature of ancient India, consider the following statements:

1. Panini is associated with Pushyamitra Shunga

2. Amarasimha is associated with Harshavardhana

3. Kalidasa is associated with Chandra Gupta-II

Which of the statements given above is/are correct?

Q42 With reference to the religious history of India, consider the following statements:

2. Lokottaravadin sect was an offshoot of the Mahasanghika sect of Buddhism.

3. The deification of Buddha by Mahasanghikas fostered Mahayana Buddhism.

Which of the statements given above are correct?

Q44 Consider the following events in the history of India –

1. Rise of Pratiharas under King Bhoja

2. Establishment of Pallava power under Mahendravarman – I

3. Establishment of Chola power by Parantaka – I

What is the correct chronological order of the above events, starting from the earliest time?

So the correct sequence is

2. Establishment of Pallava power under Mahendravarman – I ~ 600 AD

So the answer is c

The question was difficult but it was not impossible to solve, such questions separate non-serious candidates from serious candidates. If you have read the NCERTs multiple times,  If you have made notes from the book, you have made notes even in the book itself, you have noted down the timeline for history, and made notes from the newspaper, this question could have been solved. It takes extra effort but it was doable. Questions like these separate   serious aspirants from non-serious aspirants. Questions like this check your grit.

Q45 Which of the following phrases defines the nature of the ‘Hundi’ generally referred to in the sources of the post-Harsha period?

a) An advisory issued by the king to his subordinates

b) A diary to be maintained for daily accounts

c) A bill of exchange

d) An order from the feudal lord to his subordinates

Q.49. With reference to the history of India, the terms “kulyavapa” and “dronavapa” denote:

a) measurement of land

b) coins of different monetary value

Q50 Who among the following rulers advised his subjects through this inscription?: “Whosoever praises his religious sect or blames other sects out of excessive devotion to his own sect, with the view of glorifying his own sect, he rather injures his own sect very severely.”

Q62 With reference to the period of the Gupta dynasty in ancient India, the towns Ghantasala, Kadura, and Chaul were well known as:

b) capital of powerful kingdoms

Q91. With reference to the cultural history of India consider the following pairs :

2. Shramana – Priest with a high status

Which of the pairs given above are correctly matched?

5-6 Questions Found Their Mention in Upinder Singh’s Book on Ancient and Medieval India, Do I need to Change my Sources?

1. Women’s right to gain an education

Select the correct answer using the code given below :

a) Peasant resistance to the oppressive conduct of planters

b) Its unprofitability in the world market because of new inventions

c) Nation leaders opposition to the cultivation of indigo

d) Government control over the planters

Q14 Wellesley established the Fort William College at Calcutta because-

b) he wanted to revive interest in oriental learning in India

Q15  With reference to the history of India, “Ulgulan” or the Great Tumult is the description of which of the following events? 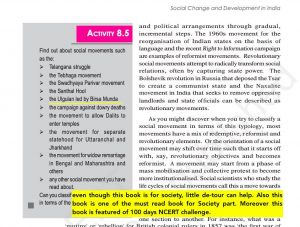 Q41 With reference to the history of India, consider the following pairs:

1. Aurang: In-charge of the treasury of the State

Which of the pairs given above is/are correctly matched?

Let us move to the next question.

Q43 Which of the following statements correctly explain the impact of the Industrial Revolution on India during the first half of the nineteenth century?

a) Indian handicrafts were ruined.

b) Machines were introduced in the Indian textile industry in large numbers.

c) Railway lines were laid in many parts of the country.

d) Heavy duties were imposed on the imports of British manufactures.

Q46 With reference to the book “Desher Katha” written by Sakharam Ganesh Deuskar during the freedom struggle, consider the following statements :

1. It warned against the Colonial State hypnotic conquest of the mind

2. It inspired the performance of swadeshi street plays and folk songs.

3. The use of ‘desh’ by Deuskar was in the specific context of the region of Bengal.

Which of the statements given above are correct?

Q47 The Gandhi-Irwin Pact included which of the following?

1. Invitation to Congress to participate in the Round Table Conference

2. Withdrawal of Ordinances promulgated in connection with the Civil Disobedience Movement

3. Acceptance of Gandhi’s suggestion for an enquiry into police excesses

4. Release of only those prisoners who were not charged with violence

Select the correct answer using the code given below

Q48 The Vital-Vidhvansak, the first monthly journal to have the untouchable people as its target audience was published by –

Now it is important to note that, it does not mean that, if Gandhi, Phule, and Ambedkar have published the above-mentioned works so that they cannot publish one more journal named Vital Vidhvansak, so guessing is risky here, but if you have a risk appetite you can take the chance. Also, the term Vital Vidhvansak is more of a Marathi word, does this helps you in eliminating one or more options. Just think. Though there is no harm in skipping this question.

The answer is a)

3 Questions Came From Shekhar Bandopadhya From Plassey to Partition and After, Should I change my Booklist?

Watch this video where I have discussed how flawed answer keys floating in the market can cause you a year:

I would like to conclude by saying, UPSC is once again stood to its genes of being unpredictable and random. However hard you try it is difficult to find a pattern, the most appropriate tip can be to read more and read the same source again and again. Grit and perseverance can be more fruitful.

I will keep on updating the posts with new updates. In the next post, I will analyze questions of Polity in the same way. If you have any query drop us a mail or comment on YouTube.

3 thoughts on “[UPSC Prelims 2020] History and Culture Sources of Question, Answerkey, and Strategy”