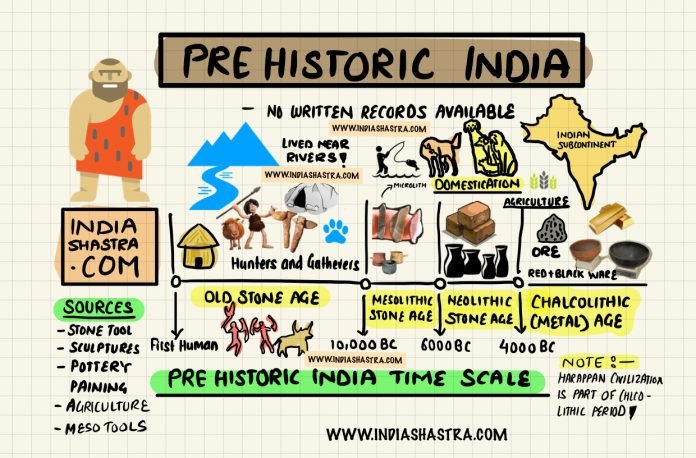 Prehistory is the period in human history before recorded events i.e no written records are available for pre-history of India. We can divide Prehistoric India into 4 ages. 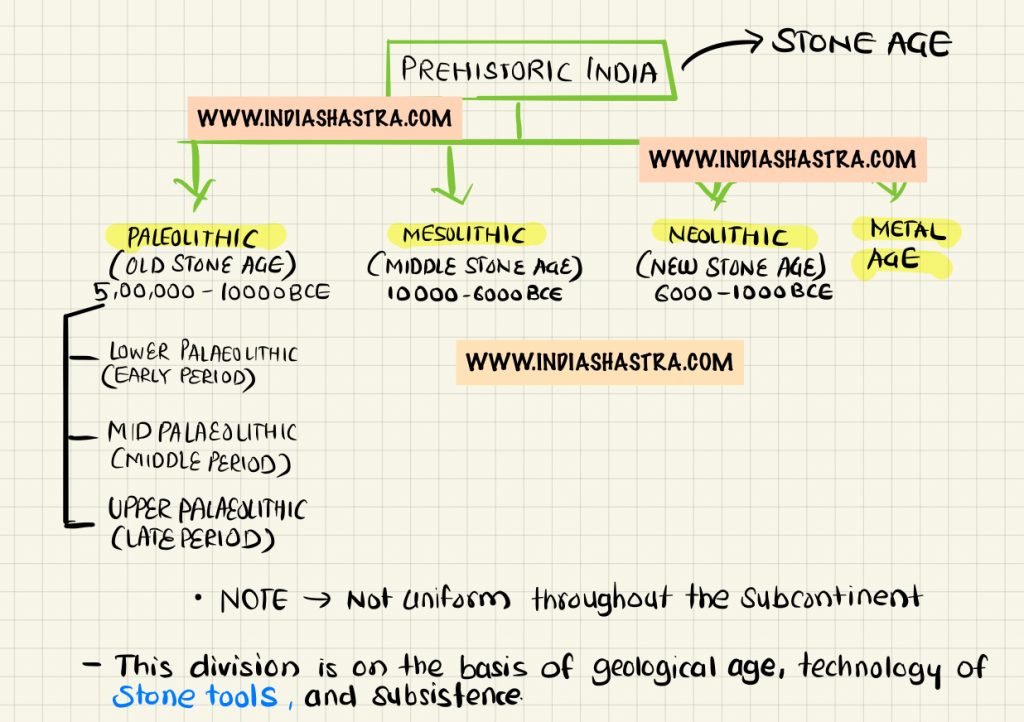 One thing that you should note is that these periods were not uniform throughout the Indian subcontinent.

The research and development in archaeology help us to understand the life and culture of the people who lived in this period.

The old stone age sites are scattered on the map of the Indian Subcontinent (look at the map below). Generally, these sites are located near water sources, as the water was imp for survival.

Several rock shelters and caves used by stone age people are scattered across the subcontinent.

Most of them lived in huts made. These huts were made of leaves.

What Food Did They Eat?

These people hunted animals and gathered plants and fruits, that is why we call them hunter and gatherers.

Man is the only organism which uses a tool. These people used stone tools. Stone implements were made of a hard rock known as quartzite. Also, large pebbles are often found in river terraces.

To hunt large animals they worked in packs like wolves and used large stone axes.

How Did They Communicate with Each Other?

We have very little knowledge of their language and how they communicated with each other.

With the passage of time, their way of life changed. They domesticated animals made pots and started growing crops. All this led to a settled way of life.

The next stage of human life is called Mesolithic or Middle Stone Age which falls roughly from 10000 B.C. to 6000 B.C.

This phase was the transitional phase between the Paleolithic Age and Neolithic Age.

Excavators found a different type of stone tools here. These tools were not more than five centimetres in size called microliths.

Change in Way of Life 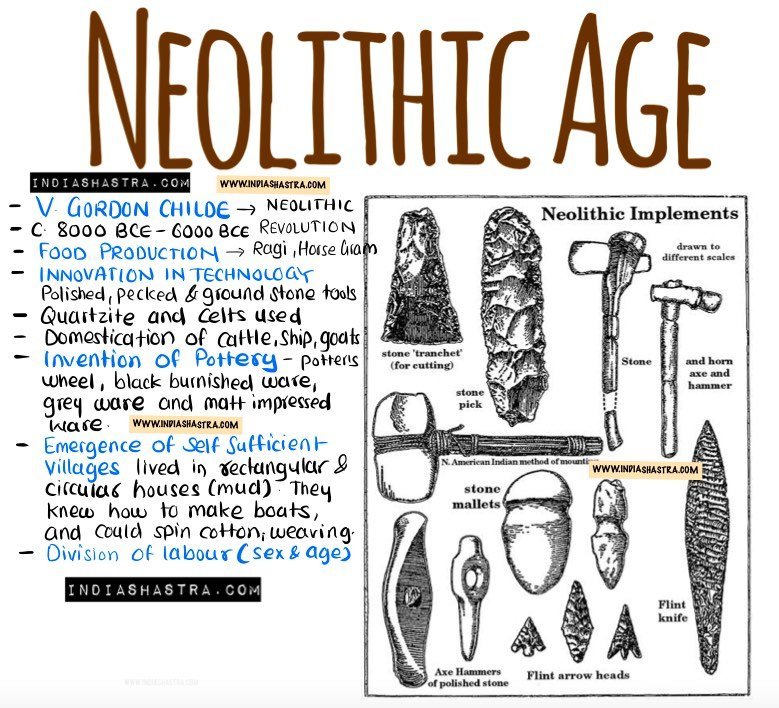 The Neolithic period is followed by the Chalcolithic (copper-stone) period when copper and bronze came to be used. 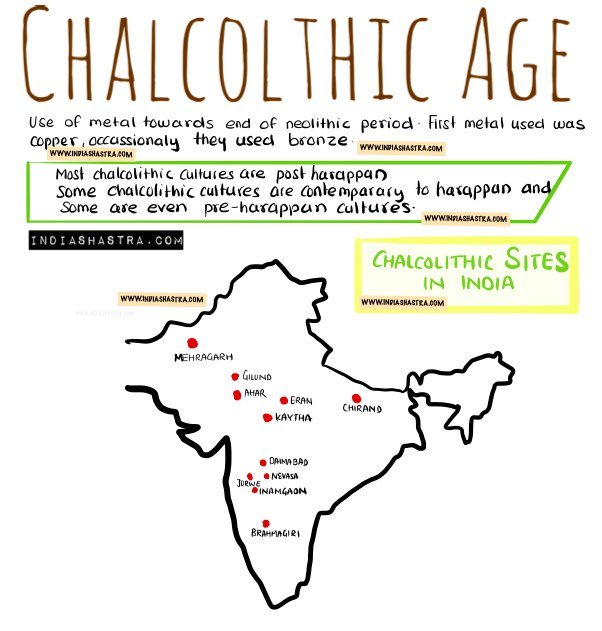 Excavators found black and red pottery + iron artefacts such as hoes and sickles and small weapons in the burial pits.

Some Pre- Historic Sites in India 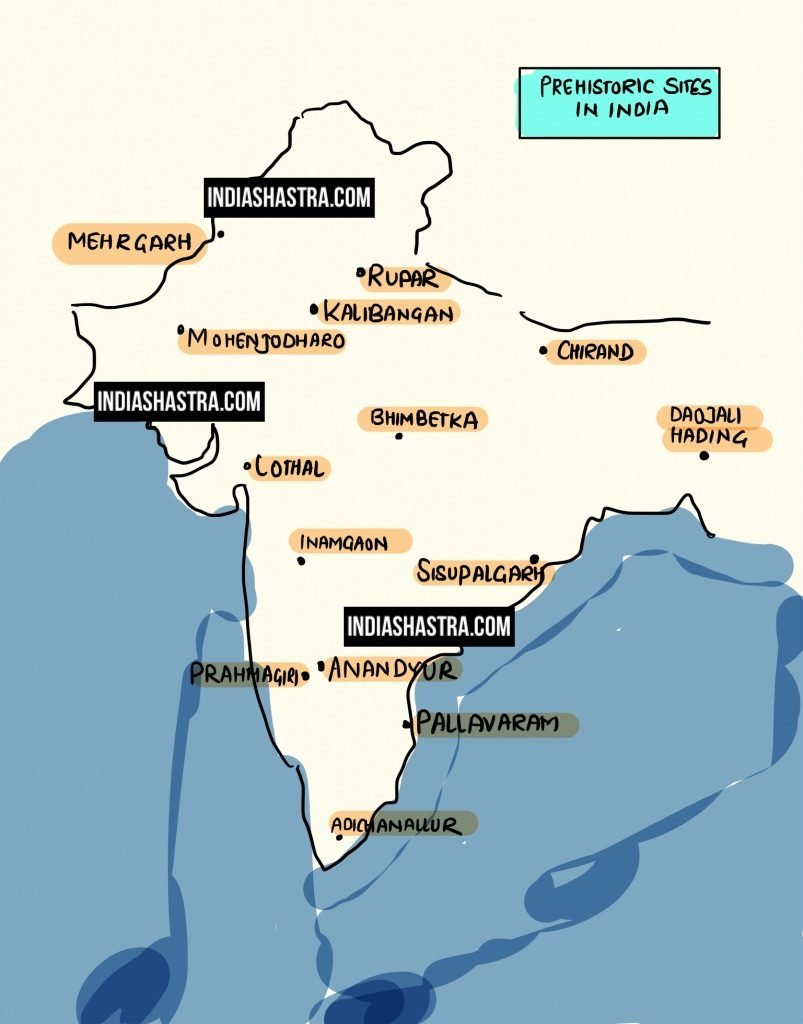 In the next post, we will learn – Harappan civilisation. 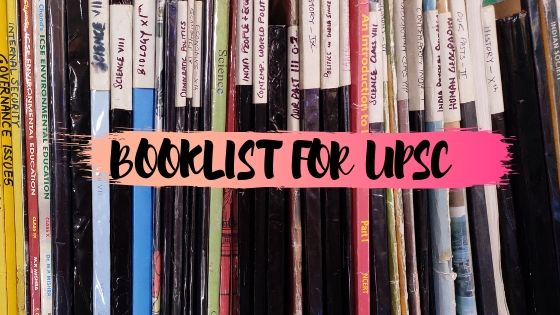 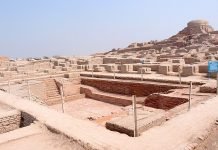 [Ancient India] All You Need to Know About Indus Valley Civilization...